This Article was placed on the Texas seniors' website not long after the National convention of the Alliance for Retired Americans, was held in Washington DC on the 6, 7, & 8 of September of this year. More than 600 seniors from just about every state were in attendance.

The National organization has over 3 million members and there are state affiliations in 28 states at this time, Texas being one of them. Originally the Alliance was The National Council of Senior Citizens, but between 2000 and 2001 with the help of many Unions, it became The Alliance when it was opened to all Union Retirees. It since has expanded to take in all Senior/Retirees from any Organization and even individual memberships.

Its purpose is to promote and protect such senior programs as Social Security, Medicare, Pensions, Affordable Housing, Nursing Home Care, and many such programs affecting seniors. In the process of doing so it has by necessity become Political. It being necessary at times to let the lawmakers know what is good or bad legislation as regards to purpose. Here is the website for more Information.

In any event, by now most of you know me as being

Very Political, not only when it comes to senior programs but Politics in General besides being a very active Union Member, a very active Democrat, and a very active liberal who would fight for anyone's rights. You might also know me as putting my money where my mouth is, and to me that is the most important thing that I do every chance I get. After all it keeps me, always in trouble with friends and relatives, but above all it keeps me healthy and young at heart. At 80 or more that is very important, Healthy and Young At Heart, this could get me to 100. After all I am needed in this world, who else has a big mouth? And, I have been to DC six times in the last dozen years to open it.

Delegates to the ARA Convention went to the 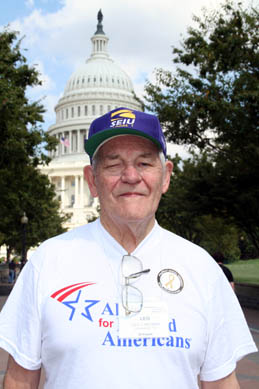 nation's capitol on September 7. Leo C. Helmer, an octogenarian from Monahans, Texas (west of Midland) participated in the rally and lobbying effort.

Helmer is a veteran of the National Maritime Union, the Teamsters, the Stagehands, and the Service Employees' unions. He continues to proudly wear his SEIU shirt and hat while working with other unionists in the Permian Basin (Midland-Odessa) Central Labor Council. This was hardly his first time to lobby Congress; he began in 1992!

The delegates gathered on the lawn of the Capitol Building for a rally to preserve Social Security. They took donuts that had been donated by the Bakers and Confectioners' Union. By giving their representatives a donut, they made the point that millions of seniors are falling into the "donut hole" of premiums but no insurance coverage in the Medicare Part "D" (for disaster) Prescription Drug Law. Even though most Americans realize realize that the drug bill benefitted drug companies and not customers, they really get a jolt when they find themselves in the "donut hole!" Most of the activists with the Texas Alliance for Retired Americans have a video movie that explains the horrendous aspects of Medicare Party "D." 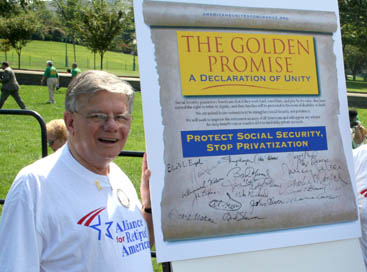 Gerald McEntee, President of the American Federation of State, County, and Municipal Employees (AFSCME) led the capitol rally with strong calls to defeat the Bush agenda. No fewer than twenty Representatives and Senators joined the rally in person to express their commitment to seniors' issues and to publicly sign the "Golden Pledge" to save Social Security from privatization. Senate leader Harry Reid and House leader Nancy Pelosi were among them. The pledge was taken back into the capitol buildings to be signed by other elected leaders.

The plaque reads: "The Golden Promise: A Declaration of Unity. Social Security guarantees Americans that if they work hard, contribute and play by the rules, they have earned the right to retire in dignity, and their families will be protected in the event of disability or death. We are united in our commitment to strengthen Social Security, not privatize it.

'We will work to improve the retirement security of all Americans and will oppose any scheme for deep benefit cuts or massive debt to fund risky private accounts." 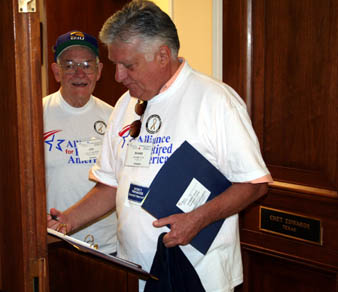 After the rally, Leo took Shane Fox of Tyler and Gene Lantz of Dallas to visit his Congressman, Republican Michael Connaway of Midland. The trio also visited the offices of Representatives Chet Edwards and Lloyd Doggett. Shane Fox did some other lobbying on his own. Shane is shown signing the register at Chet Edwards' office while Leo looks on.

Outlook is Improving for Progress in America 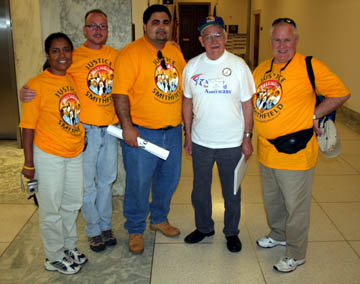 Leo Helmer had good reason to be upbeat about the future of America as he went through the hallways of the Capitol buildings. He ran into other unionists who were also pushing for fair treatment. A group of United Food and Commercial Union activists, for example, sought congressional help in getting decent treatment from the Smithfield company. 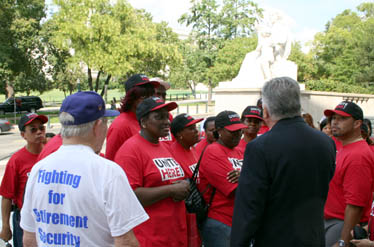 Unite-Here! unionists were trying to get the Employee Free Choice Act passed. It has sufficient co-signers in the House of Representatives to insure its success, but the bigwigs who control the agenda won't let this, and other progressive bills, on the House floor!

Back at the convention, speakers continued to educate the delegates about legislation affecting America's seniors. The recent pension "reform" bill, it was explained, benefitted the financial services industry much more than it benefitted pensioners. Even though the Pension Benefit Guarantee Corporation (PBGC) will be strengthened by the bill, many companies will find it easier and more profitable to "opt out" of traditional defined benefit pension plans.

"We have moved farther away from a system that encourages defined benefit plans," said the analyst.

Experts on governors' races, House races, and Senate races predicted that more progressive leaders will be elected in the Fall. "We have a chance to take 22 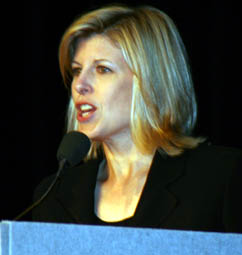 governors and take over the majority in this country." Said Penny Lee of the Democratic Governors Association. As for tactics, Lee said, "There is nothing more impressive than a neighbor to neighbor campaign."

Conventioners got involved in traditional democratic discussion over the resolutions that were offered. One of them was returned to the incoming Executive Board for further work. Speakers said that it emphasized insurance fraud by patients instead of the fraud perpetrated by insurance companies, which is by far the larger issue. The seniors agreed unanimously on getting national health care. A resolution calling for a national plan for medical records met with a lot of arguments, but was eventually passed. Speakers said they didn't want any information accumulated that might be grabbed and misused by the government.

Activists from the newly-formed Texas Alliance for Retired Americans went to the national convention in Washington DC September 5-8. Over 500 delegates from across the nation participated. Almost all of the speakers and the discussion from the floor were about changing the people in government this November. The organization is larger, better integrated, better educated, and more focused than any time in its 5-year history. The convention made a special turn toward getting more community organizations rather than continuing to concentrate on retiree groups that are affiliated with unions. 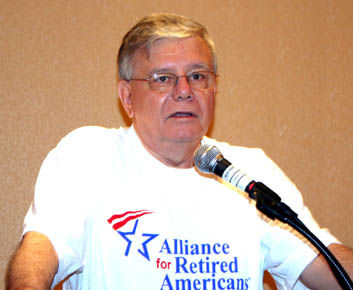 President George Kourpias said, "Retirees will determine who wins and who loses this Fall!" He explained that seniors have far better voting records than younger Americans, and our persistent commitment to democracy gives us special importance in non-presidential elections, when youthful voters forget to vote. Senior votes make up around 19% of every election, but the percent rises to 22-23% when there is no presidential race.

Unlike the AFL-CIO and many other progressive organizations, the retirees' convention took no position on the war in Iraq. However, many of the speakers drew big applause when they spoke disapprovingly of what is happening in the Middle East. Syndicated Columnist Mark Shields said, "I think it would be a failure morally and civically not to discuss this war." He drew applause when he called the military action, "A war that was conceived in deceit and borne in arrogance." He joked that President Bush had put together a war coalition of 42 nations, "...only 3 of which had armies!" If the United States were to remove its forces, Shields laughed, "Iraq may be overrun by Iraqis!" Shields pointed out that the so-called "war on terrorism" had gone on too long: "In November, this war will have gone longer than WWII... Longer than it took to defeat fascism in Europe!"

Delegates were very aware of being in the nation's capitol. They held a rally on the capitol lawn and lobbied their representatives. While there, they ran into other groups that were seeking justice in the halls of government. Even around the convention hotel, politics was in the air. Only a few blocks away, a vigil and fast was going on for democracy in Burma. 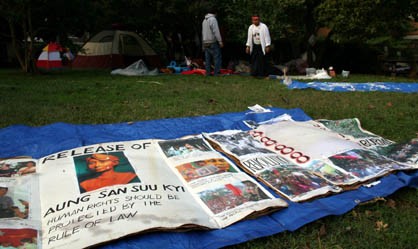 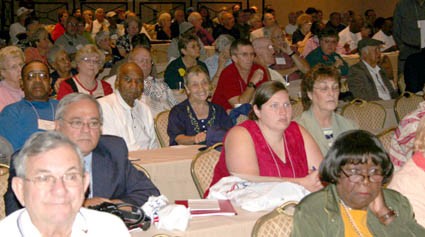 To see this article as it appears in TxSenior.com please use the following link:

This article is based on the one by Gene Lantz in the Alliance for Retired Americans website.