Here is another article

In the next several issues of Pencilstubs, I will try to continue my several articles on the history of Western Swing. Many, many, comments have been received directly by me and many more have appeared below the several articles I have written since the October Issue of 2000. There are still comments being made on the original article because it is referenced any time someone just looks for Western Swing by typing just those two words into a search engine. Well, let’s face It, I love the referrals, and now just thinking of that, I feel I should continue to add all the information I can find on an interesting subject, from all sources beside all the information I have accumulated over the years from clippings and the backs of old record covers.

So every month or so I will find and report on some interesting fact, history, or an individual who helped make this genre very special in the history of American Music.

Here is another article, this one on a very interesting group who did so much for

Keep Posted to This Site!

Well, they are not quite that old, but I am going to use that date anyway, for reasons I’ll explain as you read on. And yes they are still in existence, so let’s find out how a group with the improbable name of ‘Light Crust Doughboys’ got that name in the first place.

I am using 1929 as their start date, because that is when James Robert (Bob) Wills left West Texas and moved to and formed the ‘Wills Fiddle Band’. It was a rather unimposing group made up of Wills as fiddler and Herman Arnspiger as guitarist. They were good enough to get a few radio appearances, and when Milton Brown joined the duo as a vocalist in 1930, it got more recognition. Soon they were on the air at noon each day and when they added Truett Kimsey as their announcer with an enthusiastic announcement.

“The Light Crust Doughboys are on the air”

And then the theme song

“Listen everybody from near and far

If you want to know who we are

This went over so well that it became the permanent salutation of the Doughboys. 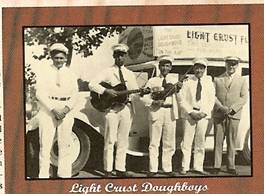 That was 1931. The name came from ‘The Burrus Mill and Elevator Company which produced Light Crust Flour, and who Wills, with the help of fans and friends, persuaded to sponsor the original group as the ‘Light Crust Doughboys’. And here they are back then. This picture is from an old 78 album cover and probably dates to 1932 or thereabouts.

After just a few weeks, W. Lee (Pappy) O’Daniel, then president of Burrus Mill, cancelled the show because he didn’t like “Hillbilly Music” (He didn’t like hillbilly music???. That egotistical maniac of a boss, who became governor of , used ‘Hillbilly, Country Western, Western Swing and any other genre that he could dig up, to form his own band and help him get elected). That was probably the start of the Wills/O’Daniel feud that went on for years. However, the clamor that arose from the fans of the show soon put the Light Crust Doughboys back on the air, but now, ‘the boss’ got into the act. All the band members had to work at Burrus Mills; nobody could talk on the air but the announcer, O’Daniel, after he fired Kimsey; and the band could not play dances or appear anywhere else but on the show.

The Band was successful even with all the limitations. The fans loved them, but most fans had a love/hate impression of O’Daniel. Soon the band members began to mumble and grumble. The first to leave the Doughboys were Milton Brown and his brother Durwood, and they formed the band known as the ‘Musical Brownies’. And, soon Wills and Arnspiger left and found enough good musicians around to start a band called ‘The Playboys’ (‘The Texas Playboys’ name came later when they moved to ).

O’Daniel said he had to fire Wills for drinking and missing shows. However, O’Daniel was greatly impressed with the band’s large following and as the ‘new’ announcer for the show he organized a network of radio stations that broadcast the Doughboys throughout and most of . Such stations as WBAP and KTAT, Fort Worth’ WOAL, San Antonio’ KPRC, Houston’ and KOMA, Oklahoma City soon were broadcasting the Light Crust Doughboys all over the Southwest and the band became a household name. Of all the early Doughboys, Wills was the most influential; they never departed from the fiddle band style that Wills established in the band’s formative years.

In late 1933 O’Daniel took a brand new talented group of Doughboys to for a recording session with Vocilion, and he continued as the bands manager and announcer well into the 30’s. In 1936 Burrus Mills fired O’Daniel after a series of disputes and he went on to form his own band called the ‘Hillbilly Boys’ and even started his own flour company. O’Daniel used his band in his successful bid for Governor of Texas in 1938. The song “There’ll Be Some Changes Made” was really his political statement of the times.

The Doughboys reached peak popularity in the years leading up to WWII. In addition to launching, Wills, the Browns, and O’Daniel, it provided a venue for many of the best musicians in the Western Swing genre. In 1937 many musicians such as Kenneth Pitts and Clifford Goss played fiddles. In the rhythm section were Dick Reinhart on guitar; Marvin (Smokey) Montgomery, tenor banjo; Ramon DeArman, bass; and John (Knocky) Parker, piano. Muryel Campbell played lead guitar and at various times Cecil Brower played fiddle.

In the early months of World War II most members of the band went into either the armed forces or war-related industries. In 1942 Burrus Mill ended the Doughboys' radio show. The mill reorganized the band after the war in 1946, but the broadcasts were never as appealing as they had been in the prewar years. The company tried various experiments and even hired Hank Thompson and Slim Whitman in the hope that somehow the radio show could be saved. By 1950 the age of television had begun, and the dominance of radio was over. With its passing went the radio show that Texans had enjoyed since 1931. The Light Crust Doughboys were no longer "on the air”. However, even through the 1970s and the 1980s, the companies that made Light Crust Flour enthusiastically used Doughboy great Marvin "Smokey" Montgomery and The Light Crust Doughboys to promote and advertise their product.

The Doughboys embodied the very essence of the "golden era" of radio-live performances and the dominance of programming by advertising agencies. Their radio program began as a way to sell Light Crust Flour. W. Lee (Pappy) O’Daniel quickly learned how to exploit the power of radio to influence voters, and he put that lesson to good use to become Governor of Texas, and the model for Pappy O’Daniel in the movie “Oh Brother, Where Art Thou?”. But, the Group was a lot more than the talented musicians associated with them, Bob Wills and Milton Brown, each of whom receive credit for founding Western Swing. Even after all three of those figures were gone, the Light Crust Doughboys soldiered on, becoming one of the most popular Western Swing bands in Texas; versions of the group continued to perform right up into the present.

And, speaking of talented musicians, and founders of musical genre, a mention here of the oldest member of the Light Crust Doughboys is surely in order. Marvin ‘Smokey’ joined the band in 1935 and continued playing with them until his death, June 6, 2001, at the age of 88. He was known worldwide for introducing Dixieland style jazz banjo to Western Swing music. The influence of musician, arranger, composer, and producer, ‘Smokey’ Montgomery could be heard every time Western Swing music, Dixieland style jazz banjo, or intricate swinging banjo solos were played. In an eight-decade-spanning career which had seen ‘Smokey’ recognized in virtually every Western Swing and Banjo Hall of Fame in the world, he had more than earned the title of "Mister Tenor Banjo" and "Mister Light Crust Doughboy". In February 2001, ‘Smokey’ was honored with a Grammy Nomination in the gospel music field for his work with The Light Crust Doughboys, and he had earned Grammy Nominations in 1997, 1998, and 2000 for best recorded work in his category. In 1995 the 74th Texas Legislature called Marvin ‘Smokey’ Montgomery a “National Treasure” along with his fellow Light Crust Doughboys. The Light Crust Doughboys were also designated “Official Music Ambassadors for The State of Texas”.

But, from the very first "The Light Crust Doughboys are on the air" in 1931, and continuing through their silver age renaissance in the 1990s and beyond, the Light Crust Doughboys and their illustrious alumni like Bob Wills, Milton Brown, Herman Amspiger, Tommy Duncan, Johnnie Lee Wills, W. Lee O'Daniel, Leon McAuliffe, Marvin Montgomery, Cecil Brower, Knocky Parker, Kenneth Pitts, Muryel Campbell, Leon Huff, Dick Reinhart, Hank Thompson, Slim Whitman, Jim Boyd, Johnny Strawn, Ronnie Dawson, Carroll Hubbard, Jerry Elliott, Bill Simmons, John Walden, Art Greenhaw and others wrote a large and important chapter in the history of both Texas and American music and are continuing to do so today. 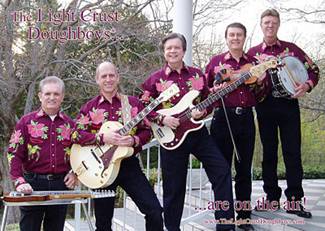 And here are some updates and recent history of the group. Millions of Texans and Southwesterners have been touched over the years by the Light Crust Doughboys. From 1930 to 1952, fans faithfully tuned in to their early-morning and, later, noontime radio program, and turned out in droves to hear them play live. Many are still doing so today wherever they appear. Here is a recent picture of the group. And here is their website:
http://www.thelightcrustdoughboys.com You Texans and anyone else who read this may want to know where they will be appearing and what they are doing the rest of this year on onward. And, you may also want to know where to get CDs and DVDs of the Doughboys.

The Light Crust Doughboys are considered the longest-running country and western band in the world and one of the top historical bands of all time.

To quote THE DALLAS MORNING NEWS,

The present day leader and chosen protégé/keeper of the Light Crust Doughboys is Art Greenhaw as chosen by Marvin ‘Smokey’ . They are still Western Swing, through and through, but have won Grammy’s for their gospel music recordings.

THE LIGHT CRUST DOUGHBOYS RECEIVE WILL ROGERS AWARD AND

In August 7, 2007 ceremonies in Garland, Texas at the Granville Performing Arts Center hosted by the international Academy of Western Artists, The Light Crust Doughboys have received the Will Rogers Award and statue for Western Swing Duo/or Group for 2007.

The Award and statue are designed according to AWA credo "to recognize and honor those individuals who, through outstanding personal accomplishments, have helped preserve and perpetuate the traditions, values and heritage of the American cowboy."

Compiled and written by

With the help of Art Greenhaw, the present leader of the Doughboys, and on-line interviews.